It was a gray and dismal day when the sun rose this morning. Heavy overcast, windy, and forecast for rain. We had the anchor up shortly after sunrise at 0707 and were underway for Cedar Keys.

We had to run about four miles offshore to stay in water over 10' deep. So we were a bit exposed to the 20 knots northeast wind. It was bumpy for the first few hours but by 1015 it had laid down and was a smooth ride. So smooth, in fact, that we considered pushing on further than Cedar Keys. Unfortunately, there was no place to anchor until we got to Tarpon Springs, and that was just too far for a one day run.

We dropped anchor at 1320 in the north channel to Cedar Key. We were in the middle of nowhere, and very exposed to the wind. But the channel was too narrow, twisty, and shallow for us to get in any closer. Fortunately, the wind was not strong and the water was calm.

We launched the dinghy and headed into town. It was quite a ways, and difficult to follow the channel. Bob and Gail left about 15 minutes before us, and told us later they got lost twice on the way in. I found my way to town okay, but it was tricky finding how to get in. The only way in to the little harbor there is under a very small bridge, that is only about 20' wide, and 8' above the water. It is so small that you really can't see it until you are on top of it. I got lucky and noticed a small boat disappearing around a corner. When I got closer I could see that corner was the bridge opening. It made a 90 degree turn just as you entered it.

We tied up at the public dinghy dock (only room for three boats) and walked into town to find Bob and Gail. We tried calling their cell phones, but got no answer.

It was a cute little town, and it was hoppin'!  Music blasting from multiple bars and restaurants on the waterfront. As we got a few blocks away from the waterfront it got much quieter.

This is the only picture I got of the town... the happy fisherman. 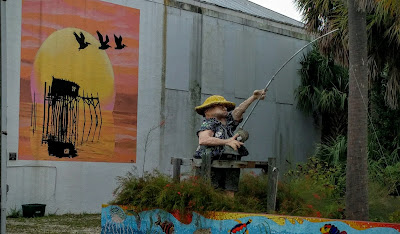 Our goal was to find Tony's Seafood Restaurant so we could have a bowl of his world famous clam chowder. A quick search on Google maps and we knew where to go. As we approached the restaurant Bob walked out with his phone in his hand, trying to call us. He said there was no signal in the building.

We joined them at their table and placed our order for chowder and our entrees. They had already started in on their chowder. It took quite a while, but our entrees finally appeared. But no chowder. Once I saw the size of the seafood platter I had ordered I didn't care about not getting the chowder. But Bob was having none of that; he said that was the whole purpose for coming here.  He called server over and asked her where our chowder was. She apologized profusely, and said she would get the bowls out right away. I told her to cut the order down to just one bowl, as both Paula and I had more than we could eat already.

The chowder arrived, and definitely lived up to its reputation. Best chowder I have had since visiting Seattle. They sell it by the can so we bought some to have on Thanksgiving.

We finished our meal and started back to the dinghy dock. Paula found a liquor store on the way back so we all had to detour into there. Prices weren't too bad so we bought a bottle of vodka, and tequila.

The weather was starting to look nasty, with a line of dark clouds approaching. We decided to pick up the pace so we could get back before it hit. We hopped in the dinks and headed out. As Bob passed under the little bridge he turned left. That was the wrong way. I hollered at him and pointed to the west, then took off that way. He turned and followed.

We made it back to the boat without getting wet. I even had time to take Duke for his afternoon beach constitutional. Then back to the boat for a relaxing afternoon. It was very quiet and peaceful here. We kept hearing big splashes, and would occasionally catch something out of the corner of our eye. It looked like a very big fish. Finally I was looking in the right direction, at the right time. It was big 5-6' sharks!!  I did not recognize what kind. I had seen spinner sharks jump, but these were definitely not spinner sharks. We heard them all night long.