It has been a tough year, for both us and the boat. Paula had a run-in with cancer, and subsequent radiation therapy. Thankfully, she is recovering, and we are confident of a positive outcome. She is chomping at the bit to depart on our winter cruise to the Florida Keys. And, hopefully, on to the Bahamas.

The boat suffered serious damage in a freak storm on April 25th. This storm fired up over Lake Pontchartrain and moved east over Mississippi Sound, and then Mobile Bay. Getting stronger along the way. We were anchored on the NE end of Cat Island, MS and experienced 70+ mph winds for over an hour. Since the winds were out of the north, we were very exposed.  As the seas built, the dinghy flipped and sank. The rough seas stripped everything off the dinghy. In the meantime, they had built to the point Microship was literally banging on the bottom when in the troughs of the 8'+ seas. Ultimately, I had to risk pulling in the anchor so we could move to deeper water. This caused a fair amount of damage to the bow pulpit and windlass. But, we did finally get anchored in deeper water and continued to ride out the storm. This same storm blew through Mobile Bay while a sailing regatta was underway. Something like 40+ boats were capsized. Sadly, six people lost their lives.

After the storm passed, it was still too rough to try to do anything with the dink. We spent the afternoon cleaning up the mess in the boat.

The next morning I hopped in the chilly water and finally managed to get the dink righted, but still full of water. I pulled the plugs and we got underway to allow the water to drain.


Once all the water was out, I quickly replaced the plugs, then hoisted the dink back aboard. It would be a long time before it would be ready to use again. 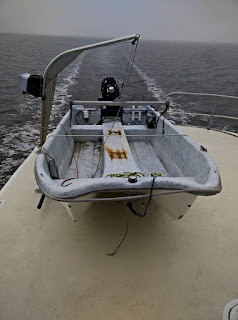 We finally made it back to the marina, and contacted our insurance company. We brought Microship to Bay Marine Boat Works on May 1st. It would be almost four months before we would get her back.

Posted by Unknown at 6:03 PM No comments: