I was up at 0530 to start getting the boat ready for our departure. Since we were going to have to run offshore I wanted to get going before the wind picked up. About 0630 I heard the generator on Stylist start up, so I knew Bob & Gail would be departing early, too. I called down to Paula to let her know what time it was, as we needed to get underway.

Stylist was the first to depart, and we waved goodbye to our new friends. We had become quite close over the last 2-1/2 weeks, and were going to miss them. We got underway a few minutes later and departed the mooring field at 0700. As we entered the Gulf and turned south Bob called on the radio with a final farewell.

Paula loves bagels, and I found blueberry bagels at Publix yesterday. So bagels with cream cheese for breakfast. I can see there is no way I will be losing any weight living aboard. Heck, I have put on 5 lbs. since we left on Nov. 3rd!

The seas were not bad at all so we continued further offshore to maintain a straight line course for Cape Romano Shoals. At that point we would turn east towards the Everglades and find an anchorage for the night. That would be a 62 nautical mile run, so would take us about 8-9 hours.

As we got further offshore the wind started picking up, and the waves got bigger. I decided it would be worth it to run closer to shore to stay in calmer waters. It would add a bit of time to our transit, but would be much more comfortable. We noticed other boats traveling south were doing the same. 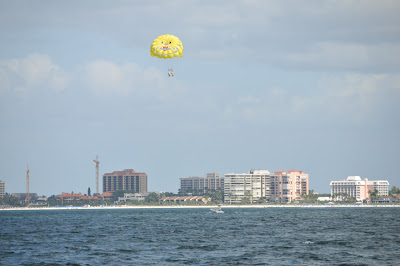 As we approached Cape Romano shoals I decided it would be best to pilot the boat from the up on the bridge. It is much easier to see changes in the water depth from up there. Shoals like these are notorious for changing constantly. The path I chose on the chart showed at least 12' all the way through. The reality was that if I had followed that path we would have run aground. I was able to zig zag through the sand bars only saw less than 12' one time.

After passing the shoal area we had a straight shot at our planned anchorage inside Indian Key Pass. This would put us in the Everglades National Park. We arrived at Indian Key Pass at 1500, and moved inland to Russell Pass where we dropped the anchor at 1530. Very secluded, in the middle of the mangroves, no other boats in sight. When passing Indian Key we saw hundreds of white pelicans sitting on the sand bar. 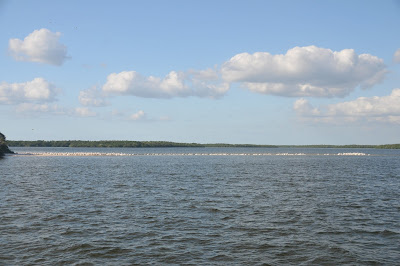 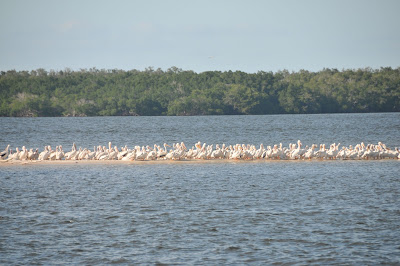 I lowered the dinghy so I could take Duke to shore. He has been holding it since around 1300 yesterday. But it was impossible to get through the thick growth of mangroves to get to shore. I am not even sure there was a shore. It just looked like a mass of mangrove roots. I thought I may have to go all the way back to the Gulf to locate a beach for him. But on the way there I finally saw a large shell bank. Perfect. I eased up to it, Duke hopped off, and took care of business. Five minutes later he was back aboard and headed to the big boat.

I bought a box of fried chicken at Publix yesterday, as well as a tub of potato salad. So that is what is for dinner tonight. Nice not to have to cook!

We had a beautiful sunset tonight. I am looking forward to star gazing tonight as we should have really dark skies. 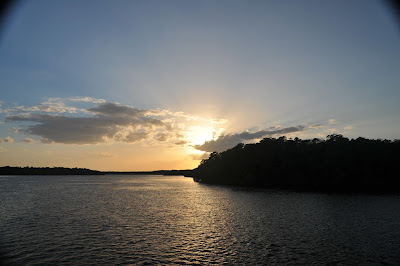