We were up well before dawn and checked the weather forecast. It was not a perfect day for crossing, but it was good enough. We quickly got everything secured and I headed to the bow to get the anchor up. This is the view that greeted me...

We had the anchor up and were underway by 0630. It was going to be a long day so we needed the early start. We needed to get to Gun Cay cut well before dark. It is important to be able to visually pilot the boat through the shallow waters on the east side of the island.

Conditions heading out to the reef were markedly better than yesterday. We had perhaps a 1-2' chop, barely noticeable in a 60,000 lb boat. Our excitement grew as we neared the reef and we could see good conditions on the other side.

As we entered the open ocean we started picking up some larger swells, but they were well spaced out and caused no problems. An hour or so after passing through the reef our speed over ground started slowly climbing. We had entered the gulf stream and were getting a nice 2.5 knot push. Our normal cruise speed is about 7.3-7.5 knots. Now we were making 9.6-10 knots. Our time enroute had been cut by well over an hour, and we would be arriving at 1500 or so, rather than 1630.

The water color changed to a deep cobalt blue. Flying fish were springing up everywhere. We saw several large turtles, and lots of dolphins. This guy spent a bit of time checking us out!


All in all, we had a pretty uneventful trip. We did get slapped with a large wave from time to time, but the ride was tolerable, if not particularly comfortable. But it was much preferable to yesterday.

We passed quite a few cargo ships plying the gulf stream. I was happy that I had installed an AIS transponder to they could see me more readily. These big guys really clip along. It was comforting to know that I was showing up on their chart plotters and radars.

Land ho!  At 1400 we spotted land, and our push from the gulf stream was lessening. A while later we could see the lighthouse at Gun Cay cut, and headed straight for it. As we neared the island we could see large waves crashing along the rocky shore. Checking the chart plotter I saw that the channel ran very close to that shore.  I would need to be especially vigilant passing through there.

When we were about 5 miles from the island our phones dinged with a text alert. This surprised me as did no expect to have phone service until we purchased a SIM card from BTC, the Bahamas Telephone Co. The text was from T-Mobile welcoming us to the Bahamas, and informing us we had unlimited data and texts while in the Bahamas. Phone calls would be 20 cents/ minute. I was pleased as punch!  I did not have to buy a BTC SIM card and data plan, and my regular unlimited plan would work over here. Woo hoo!

As we entered the channel I disengaged the autopilot. I did not want malfunctions in these tight quarters. I hand steered through the area, with the rocky shore not more than 30-40 yards away. It was nerve racking watching those waves crashing so close to us. In addition, the current was raging through the cut and making to boat slow to react to my steering inputs. Although it only took 10-15 minutes or so to get through, it seemed much longer. But we are still in one piece.

We proceeded to the anchorage near the airport. There were three boats there already, a large catamaran trawler and two small sailboats. We nestled in with them and got the anchor down.

We had done it!  Finally completed our Bahamas crossing, the first step to our winter cruising grounds. It felt good to have accomplished this, and good to be in a nice calm anchorage. We hoisted the yellow quarantine flag, the promptly mixed up a sundowner. We took our drinks to the swim platform and dangled our feet in the beautiful, clear water. 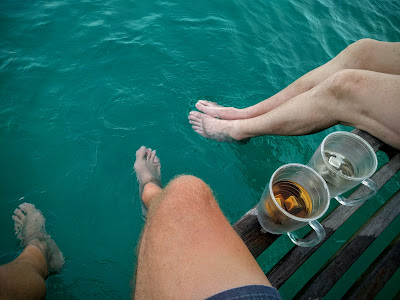 Tomorrow we will begin the second of our three leg journey to the Exumas. Weather forecast looks good to cross the Grand Bahama Banks.